Cardinals Insider looks back at the team’s one-of-a-kind 53-part #BirdToTheFuture video on Instagram, complete with a behind-the-scenes photo gallery.

With the debut of the #TheFrontOffice in September of 2013, the St. Louis Cardinals (@Cardinals) became the first MLB team, and likely first overall, to tell a story episodically using Instagram video.

The Cardinals created the instagram video series #TheFrontOffice, a mascot/mockumentary during the summer of 2013 as an experiment with social-media based brand entertainment.

While the team was rolling out the new 53-episode series compliant with Instagram’s 15-second video capability starring Phyllis Smith, Fredbird, the Rally Squirrel, Cardinals players and an all-star cast from the Cardinals’ own front office, a new parody involving ‘Back to the Future’ was pitched to Ron Watermon, the Cardinals VP of Communications, by a Cardinals fan he had met during the Stand for Stan social media campaign.

Doc Crotzer – a St. Louis native & lifelong Cardinals fan who works within the television and film industry in Hollywood. Screen credits include Glee, Sons of…

Unpopular trade may turn out right for Marlins

Marlins beat writer Joe Frisaro revisits the blockbuster Miami-Toronto trade from two years ago that continues to reap rewards for the franchise. Joe’s blog, The Fish Pond, is essential reading for Marlins fans.

MIAMI — The words of Howard Cosell, the late broadcasting legend, can certainly apply to the Marlins’ controversial 12-player trade with the Blue Jays two offseasons ago.

Few moves in any sport created as much negative backlash as what the Marlins received for dealing several high-priced, popular players after the inaugural
season at Marlins Park.

Here’s a refresher for one of the most criticized deals in recent MLB history.

As unpopular as the trade was, Marlins’ ownership insisted it was the right thing to do.

Wrapping up a Crazy 2014 & Wishing Everyone A Happy New Year!

Groundskeeper extraordinaire Murray Cook puts a bow on 2014 and wishes everyone a happy new year. We’ll second that. Here’s to a great 2015!

It is very hard to believe 2014 is almost over!   So much to be thankful for from a personal and professional viewpoint.   I can honestly say that 2014 was an amazing year on a lot of levels in the baseball world.

This year I traveled more than others … logging a couple hundred days, to 13 different countries. a few hundred thousand miles.   Highlights of the 2014 year regarding sports and stuff would be:

* MLB Sydney Opener in Australia.   What a great project working with some awesome people in Australia!

* Japan Samurai All Star series. Working with our friends in Japan on 5 stadiums in 10 days

*   Toronto 2015 test event games in Ajax.  Planning for the games next summer at a cool sport complex where baseball and softball are side by side.

The Cubs are counting down the best moments of 2014, and here’s a look back at the time Greg Maddux took the podium in Cooperstown. Cubs Vine Line Magazine is a longtime PRO blogger around here, and in addition to following their blog, you can subscribe to the magazine here.

Every baseball season is filled with memorable moments, and this year’s Cubs campaign was no exception. Cornerstone players had bounceback seasons, newer additions stepped up, and top prospects made their big league debuts. To wrap up the year, we asked you to pick your top 10 moments of 2014. From now until the end of the year, we’ll be unveiling one moment per day.

No. 10: Rizzo’s late-season walk-off homer
No. 9: Hendricks makes an easy transition to the bigs
No. 8: Castro, Rizzo named All-Stars

Greg Maddux making his way into Cooperstown on the first ballot was probably just as much of a certainty as his winning an annual Gold Glove Award or confounding opposing hitters when he took the bump every fifth day. The 6-foot, 170-pound starter may…

Picking some new blogs out of the rack

Picking a bat is kind of like picking a blog. Sometimes the other ones have more hits.

Happy Holidays. I’d like to take this opportunity to re-introduce MLB.com Blogs Central, the community blog for MLB.com and MLB.com/blogs. When you see the new array of bats in the custom theme here, just think of approaching a batrack in a dugout and the fabulous choices at your fingertips. That represents the array of choices you should find as a regular right here.

As you’ve probably noticed lately, we’re now using this blog to highlight much of the excellent, topical content around here with Reblogs of select posts from both MLB PRO and FAN blog themes. We’ll showcase some deserving blogs in this community much more dynamically — in real time as opposed to just once a month. It’s a great way to stay on top of what’s happening around baseball while discovering some quality blogs and growing your own.

So first of all, make sure you’re Following this blog. If you are logged in, you should have a Follow option in the top toolbar. We also recommend subscribing to our email updates via the button in the widget to the right so you don’t miss a thing. Posts from here will naturally become more frequent as a result, and I’ll no longer compile Latest Leaders rankings.

If you come across a blog post you think is outstanding or have a post of your own that you’re particularly proud of, by all means please leave a comment here and make sure to include the Permalink URL so others can find you. (Just don’t list your own blog here every single post, though, or your commenting would be treated as spam and require subsequent approval.) And definitely continue to use your community blog as you have all these years, whether you are a rookie blogger saying hello with an introduction or a veteran interacting with longtime friends.

April will mark the 10th anniversary of the best baseball blogging community here at MLB.com/blogs, a place where we at Major League Baseball Advanced Media partner with our friends at WordPress.com to provide the most cutting-edge blogging software anywhere. We hope you will find this community blog helpful to your discovery of other bloggers and in surfacing cool posts, as part of the total MLB.com experience. A good blog is kind of like one of the bats in this picture — a trusted companion, but you still want to try some others out.

The Soul of Baseball book Review

I had purchased the book “The Soul of Baseball.  A Road Trip Through Buck O’Neil’s america” some time ago but only recently I started reading it.   I knew about the book from other friends that have read it before so it came highly recommended. Like so many people, I had seen Buck O’Neil from Ken Burns  Documentary series titled “Baseball.”  Buck O’Neil captivated me there.   I fell in love with  his humanity, his humbleness, his positive attiture, his passion for the game and his devotion supporting the Negro League museum making sure that we did not forget the contribution by the Negro Leagues players.  His voice made me feel that all was OK with the world. 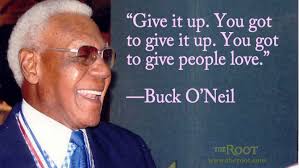 Inside the White Sox documents the building buzz around the team ahead of the upcoming season.

Inside the White Sox

As Christmas Day approaches, many Chicagoans are asking, “Haven’t we already celebrated Christmas?”

It’s certainly understandable to feel that way after the White Sox’ three Santas–Jerry Reinsdorf, Rick Hahn and Ken Williams–have demonstrated their generous gift-giving to Sox fans this offseason. The extraordinary “presents” under the proverbial Sox Christmas tree are in the form of pitchers JeffSamardzija, David Robertson, Zach Duke and DanJennings, 1B/DHAdam LaRocheandoutfielderMelky Cabrera. And the impressive haul is being praised throughout baseball as one of the most successful of the Winter Meetings/offseason.

Other fall acquisitions now on the 40-man roster include pitcher Michael Ynoa (obtained in the Samardzija deal) plus catcher Rob Brantly, outfielderJ.B. Shuck and pitcher Onelki Garcia, who were selected on waivers from the Marlins, Indians and Dodgers, respectively.

A Sampling of Positive Industry Reaction

Padres Going All In for Next Season

The Unbiased MLB Fan writes that the Padres are going all in for 2015.

When the dust settles a couple months from now, and spring training begins to kick off, the Padres could turn out to be the winners of the entire offseason. While the Red Sox are arguably the most improved team, with their pickups of both offensive presence and starting pitching, it’s the Padres that have done the most to improve their club in a very short amount of time.

Finishing with a record under .500 for the fourth straight season in 2014, not a lot of people likely had the Padres doing much of anything impactful this offseason that would give them any chance against the division dominant Dodgers and Giants moving forward. However, the Padres are seemingly putting together a competitive ball club, and are losing very little in the process, all thanks to their new general manager, A.J. Preller, who was given the daunting task of turning around one of the worst offenses from the…

What the Wil Myers Trade Means

Rays Radio explains what the Wil Myers trade means for the Rays.

Trading players with potential is never easy, but in moving Wil Myers the Rays did something they believe will make them better in 2015 as well as beyond.   On the surface, this move does differ from the others the Rays have made this off-season.

On Cloud Conine explains how the Marlins’ Social Media team got creative when announcing the recent signing of Michael Morse.

Around 3:00 P.M. the following Vine was tweeted:

(Warning: be sure to unmute the Vine before playing)

What was that? Did you miss something? Maybe this will clarify things…

Still scratching your head? Finally, all was revealed:

In honor of his Twitter handle @MCode38, the Marlins announced the signing by tweeting the morse code message “Marlins sign Morse.”