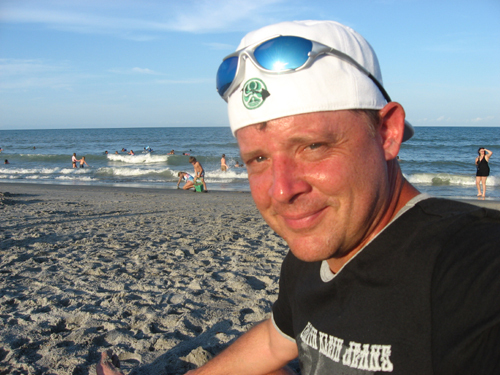 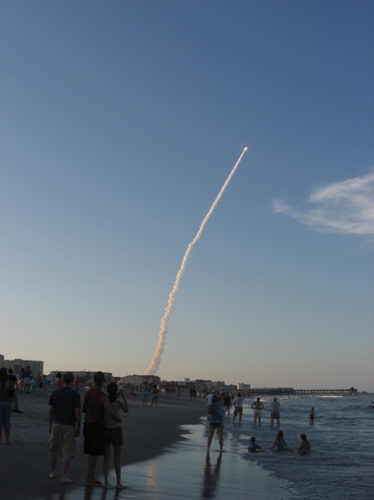 Greetings to everyone from Cocoa Beach. I spent Thursday writing articles like this and this from our first-ever Draft in a stage and mega-media setting over at Disney, then had to extend my stay an extra night so I can watch the Space Shuttle lift off at sunset on Friday! Just updated this so you can see some of the pics and videos I took from my spot on Cocoa Beach. I ran 7 or 8 miles on that beach earlier in the day, from the historic Ron Jon surf shop up to Jetty Park, went to a Starbucks for a couple of hours and wrote an MLB.com story about Jim Palmer and Dewey Evans, and then went back out there to watch Atlantis go up. It was awesome, especially at that time of day, when the plume glows in the sunset and there’s enough light to follow the Shuttle for a long time before it drifts into space.

Sorry to be a stranger here but just keep those Spheroids coming and we’ll keep using this space to post them. I can tell that my marathon training is getting in the way of posting here and apologies for that. But this community has become pretty huge and it looks like everyone is having a blast. Always feel free to leave comments right here if you need anything, and either I or Jake always check them out. By the way, can you guess why the new extra area code on the Space Coast is…

P.S., my favorite memory from the first public Draft was talking to Josh Vitters after he was selected third overall by the Cubs. When a young player like this has just been drafted and has eyes wide open, it is no big deal to ask him to take his constantly vibrating mobile phone out of his pocket and show what his text messages are. He would have gone through all 55 of them that came in after the selection, but I just liked the congratulatory one from Matt Dominguez, who would be drafted several picks later. It really showed how Dominguez and a whole world of people were following this Draft live over MLB.com as well as the new ESPN2 reach.

P.S.S., my second favorite memory was Peter Gammons telling me the night before the Draft that this is the best under-27 batch of talent he can ever remember in Major League Baseball. That is a huge statement from someone who was around for the Jim Rices and Fred Lynns and so many others who came in with a bang through the years.

P.S.S.S., my third favorite memory was the last two fans who were left in the fifth round yesterday. It was a couple, and at the end of each round, when the Mets’ pick was announced followed by "the Yankees are on the clock," they would give a quick cheer followed by a quick boo. Someone brought them down to the Draft floor at that point and they got to hang out around the delegate tables.

Thanks for the welcome, Mark. That’s a crazy way to spend game seven! It’s funny, I remember worrying that our entire lineup would be in the ER for similar reasons. Luckily, that didn’t happen. Well, lucky for South Florida, anyway. 🙂

We wanna see a Fish or two blogging here! Who can you harrass about that?

You’re the man, Mark, you’re the man. Thanks so much. It’d be great to see a member of the Tribe writing on here…especially Grady! I appreciate it!

That’s a really good question. In my dreamworld, all players would have blogs, some better than others. You will see more and more as each season passes and more players from the teeny-myspace generation grow up with (multiple) blogs being a fact of life. CJ Wilson’s just showed up one day; he also has a myspace page…he just loves to interact like that. Nate Robertson wanted to reach out to fans as the Gum Rally phenomena took place, and then he wanted to get a push-pin map to find out where gum-chompers are around the world. Sometimes clubs have input, sometimes the Players Association, sometimes they’re here a while and sometimes they’re poof like magic. Just like the rest of us are. You’ll see new ones and you’ll see others disappear. I’ll make sure someone at the Indians sees your comment re CLE and Grady, no promises. It still comes down to whether the player has time/wants to. During postseason, we always make sure there’s one from each club, and our correspondent helps facilitate that. If CLE makes the playoffs, I’ll push for Grady for ya.

Hey Mark, how do you guys determine what players have blogs? I would love to see someone from the Indians open a blog…preferably Sizemore.

Info is at the bottom of each Spheroid (which is a profile of an MLBlogger). Thanks,

Hey Mark, sorry if I’m just completely missing it, but where do I go exactly to fill out the Spheroid questionnaire? Thanks man!

Mark, you sound like a good man. Thanks again for the insightful replies. I decided to go for the free 30 day trial and signed up last night. Check it out:

Great post. Great photos. The draft was seriously exciting, and I’m so glad it was televised. Thanks for the heads-up about the comment about my book on Alyssa’s blog. Very cool. I have a big week coming up. I think I’m being filmed in Baltimore on June 13, and I’ll be at Yankee Stadium two days later for my first EVER subway-series game. Have fun in the sun. Keep running. You’re looking good…

I wasn’t actually aware that the draft was free to the public, but didn’t look into it much.

Seth: No, there are no such examples as found in Halberstam’s book. And in fact, none of those would be “employable” by newspapers today in a beat writing capacity. They covered the game much differently, when it was still the toy department of the newspaper, perhaps an occasional quote…mainly pontificating from their ivory towers in the press box rather than today’s standard practice of staking out clubhouses and looking for hard news wherever/however it can be found. Having said that, there are certainly many examples of beat writers who simply love the game itself. Get to know someone like TR Sullivan, who I used to work with at the Fort Worth Star-Telegram (when I covered Dallas Mavs). After all those years at the paper, we hired him last year at MLB.com and he also writes a sensational blog at:
http://trsullivan.mlblogs.com

But again, no, the answer is a strict and definite “no” when you ask if there are any out there “that cover the game like those old-time journalists did.” That way of life is long, long, long gone, thrown out when free agency and the Pentagon Papers and many other demands of newspaper beat writing changed. Most beat writers today could easily slip from the MLB beat to police blotter or business beat, doesn’t matter either way, it’s about breaking some news.

Mark, thanks for the feedback. I appreciate you taking the time to do that. The reason I checked out this site today was because last night, as I was reading “Summer of ’49” by David Halberstam, it got me excited to find a good baseball writer out there to read every day. In his book he talks about how fans not only knew the players on ball teams back then, but they also knew the baseball journalists just as well because they read their stuff every day about thier favorite teams. With that said, do you know of any great baseball journalists out there today that cover the game like those old-time journalists did? All I could think of was Peter Gammons or maybe Rob Neyer or someone like that. Unfortunately their blogs on ESPN cost something too. I completely understand why you have to charge for MLBlogs, but it would still be awesome to have a blogging community just like this where anyone could write, regardless of money. So when you get a chance, would you mind shooting me your recommendations on who out there today is quality baseball reading. I would greatly appreciate it. Thanks Mark!

Joseph, it was free to the public…you snoozed/losed on that one, man. It was funny having the fans on both sides of the floor…mostly Braves fans. Cool place to live, btw.

Seth, thanks for that feedback. We started MLBlogs over 2 years ago, before myspace/youtube were household names really. So no question the world has changed since we launched, and we do have much bigger plans upcoming but no ETA. To your point about subscriptions, the only thing I can tell you is that you aren’t allowed legally to place MLB/team marks/logos on ANY other digital page outside of MLBlogs (ie not myspace/anywhere), you get to blog alongside people like Youkilis and Jenkins and MLB personalities/authors/groundskeepers/etc, and MLBlogs is linked from every page in our MLB Advanced Media universe (MLB.com, 30 club sites, etc)…so there is no other place (Google/anywhere) that has such a focused demographic that routes BASEBALL-ONLY bloggers/fans to this paid area. We have a lot of MLBloggers who have gotten cool publicity, and many pay for MLBlogs just to promote their other pre-existing blogs out there. So only $4.95 a month/free trial definitely has its benefits, but again everything is open for reconsideration and much bigger things are coming down the pipe hopefully not far.

Hey Mark, I know we don’t know each other, but I think it’s awesome what you’re doing here with the whole blog thing. It’s great that people have a place to write about the best game of all time. One question though…why do you have to pay in order to have a blog? I honestly think it’s kind of ridiculous. You would have so many more people writing if it was for free. That’s my recommendation. Make it free and I’ll be on here writing. Thanks again man. You’ve started a great thing!

Come on Mark, you know I live in Orlando. Why didnt you let me come and hang out with Keith Law and the boys? Let me try and get my foot in the door. 🙂